Ropar to Delhi Trip. The distance between ropar and delhi is 290 kms and required time is 5.30 hrs. You may choose to hire a cab to Delhi from ropar city, railway station Or Chandigarh airport.

Innova Crysta =8500 All Including No Hidden charges

Jeet Travels serving Taxi’s from Ropar to Delhi(Delhi Airport) at lowest rates. Providing car rentals for all kinds of city taxi needs, railway station, Airport Pickup/Drop Service. People can choose from the best car rental deals and hire taxi services from Ropar to Delhi(Delhi Airport) for travelling.
We provide cabs on rent at minimum prices. We are the leading Car Rental service providers in Ropar. Our drivers are very nice & polite to the customers.

Rupnagar dates back to one of the earliest civilisations of the world.Rich archaeological finds here indicate that the region was inhabited by the Harappans in the third millennium BC. The region was subsequently ruled by several Indian dynasties including the Guptas, Kushanas and Mughals. The Archeological Museum here is a repository of many antiquities, including remains of painted grey ware from the first millennium BCE. Rupnagar has played an important role in the history of the Sikhs, too. After having fought pitched battles with Shahjahan’s armies,Guru Hargobind decided to continue his missionary work in the neighbouring hills. He was donated land by the ruler of Bilaspur on which he founded Kiratpur. Rupnagar’s holiest town, Anandpur Sahib, was built by Guru Tegh Bahadur, while it was Guru Gobind Singh, the most martial of the Sikh Gurus, who established the Khalsa army here to combat the increasingly aggressive Mughal rulers, with Takht Sri Keshgarh Sahib marking the birth place of the Sikh Nation. Parivar Vicchora Sahib where Guru Gobind Singh was separated from his family on being ambushed by Wazir Khan, the governor of Sirhind; Bhatta Sahib where the tenth Guru took refuge among some Pathans, houses the weapons that he gifted his benefactors. Gurdwara Sada Barat, located on the Nangal Road, an important thoroughfare for traders between the plains and the hills, marks a spot where travellers of all kinds have halted over the centuries, including the Gurus. Rupnagar witnessed yet another confrontation in the 19th century. Maharaja Ranjit Singh and the Governor-General of East India Company, William Bentinck, met on the banks of the Sutlej in 1831, for a conference in which the East India Company gained a decisive foothold in Punjab, changing the course of its history forever. The Sutlej River, harnessed by the Bhakra Nangal Dam here forms the second largest reservoir in India, and is called Gobindsagar after the tenth Sikh Guru. The dam also creates a beautiful wetland, as popular with a variety of birds as it is with tourists. Called the Ropar Lake, it is also considered a habitat of choice of the endangered Indian pangolin, an unusual, scaled mammal that eats ants and termites, and delights visitors by making rare appearances. This long stretch of clear water is an attractive destination for aquatic sports; while walking trails along the river bank are a bird-watcher’s delights. Additionally, the Nangal Wetland in close proximity offers wildlife enthusiasts many a thrill in its resident, as well as, migratory birds from the trans-Himalayan region. 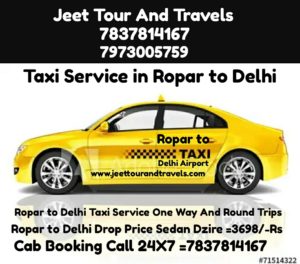 About Us
Jeet Tour and Travels offers highly professional & premium services for Celebrities & Special Corporate Guests. we have luxury taxi with well trained & groomed chauffeurs. Special supervision by our agent during trip.