The name Jammu is derived from the ruler and founder of Jammu i.e. Raja Jambulochan. It is said that Jammu city was founded by him in 14th century BC. Till date, Jammu has many temples and shrines belong to the ancient era.

The city has sparkling shikaras soaring into the sky, which point to city’s skyline. All of these domes come together to create a peaceful atmosphere most suited for this holy city of Hindus. Jammu is also an abode of much believed Hindu deity – the Vaishno Devi Mandir. This has made Jammu a major pilgrimage centre for Hindus. Most of the population in Jammu city follows Hinduism, whereas a strong enriching tradition in the region is enjoyed by Islam and Sikhism. It becomes the main economic center of the state due to better infrastructure.

Jammu city was founded by Raja Jambulochan in 14th century BC. Jambu Lochan was the brother of Raja Bahu Lochan who built Bahu Fort on the banks of Tawi River. He named it as Jambupora. It is believed that during his hunting campaign, he reached Tawi River where he saw a lion and a goat drinking water. He witnessed that after having water both the animals went their own ways. He was amazed at this sight and dropped the idea of hunting to return to his companions.

When he told his companions what he had seen, he exclaimed that this place where a lion and a goat could sip water side by side was a place of stillness and harmony. The Raja commanded his soldiers to build a palace here and a city was founded in the region. This city became recognized as Jambu-Nagar, which then changed into Jammu.

Historically, Jammu has been the capital of Jammu and Kashmir from 1846 to 1952. The name of this place also has a place in ancient Mahabharata. There is a mine near Akhnoor (32 km from Jammu) which provides evidences that Jammu city was once a part of Harappan culture.

Bahu Fort & Gardens which is also known as Bagh-e-Bahu is situated 5 km away from Jammu city. This fort is situated on a rock face which is on the left bank of River Tawi. It is the oldest fort in the city and serves as a religious temple.

This fort was constructed by Raja Bahulochan more than 300 years ago. It was later rebuilt and improved by Dogra rulers. Within the fort, there is a temple which is devoted to Goddess Kali, generally recognized as Bave Wali Mata, the supervising divinity of Jammu.

There are many temples in Jammu city. Among these, Raghunath Temple built in 1857 is popular as it is situated in the heart of the city. Work on this temple was started in 1835 AD by Maharaja Gulab Singh, who is founder of the empire of Jammu and Kashmir. The construction was finally finished under the rule of his son Maharaja Ranbir Singh in 1860 AD.  This temple is exemplary of the ancient architecture with its striking inner walls covered in gold on three sides. The nearby areas of this temple are devoted to a number of Gods and Goddesses associated with the epic – Ramayana.

Peer Kho Cave Temple is situated along the Tawi River. This temple lies in proximity to other places of religious significance such as Panchbakhtar Temple and Ranbireshwar Temple which are devoted to Lord Shiva and their legends. It is believed that Jamvant, the beer God from Ramayana, meditated in this cave. In Ranbireshwar Temple, there are 12 Shiva lingams made up of crystal. It was built by Maharaja Ranbir Singh in 1883 AD.

Jammu has an enjoyable and cold weather for most of the year and can be visited from September to April month, despite the cold season.

Jammu Airport is at a distance of 8 km from Jammu city. It is well connected to most airports of India, including Delhi Airport, Chandigarh Airport and Srinagar Airport. One can also take flights from Jammu to Agra, Jaipur and Hyderabad from here.

Jammu Tawi railway station in Jammu city is the nearest railway station. It has good rail connectivity by means of trains that come here from different Indian cities.

Taxi service in Jammu has good set-up of roads which connect it with many north Indian cities such as Delhi, Chandigarh, Amritsar, Ambala and Ludhiana. It is located at a distance of 630 km from Delhi. A variety of state transportation buses ply on these routes.

Chandigarh to Jammu by Car 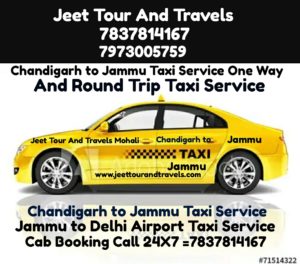 Chandigarh To Jammu One Way Taxi Services. Jeet Tour And Travels provides One Way Car Rental from Chandigarh to Jammu, which includes the pick from anywhere in Chandigarh including city / Chandigarh Airport and drop off to Jammu City. We provide instant confirmation and flexibility to book 24×7.